The Light and Shadow Chronicles symbol no. 3 – Nightfall

The cover for my newest novel A Chronicle of Chaos features a shield with eight symbols carved upon it. Each of the symbols represents a different army, faction or group of people within the series. Over the next eight days, to complement the release countdown, I will be posting about each of the symbols to give some background on the armies you can expect to learn about in Chaos and the upcoming novels in the series.

The THIRD symbol I will be talking about can be seen on the right of the shield: 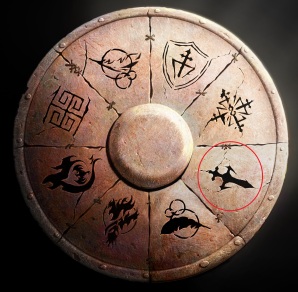 Nightfall, and especially Chaos, are extremely talented but young and inexperienced. Chaos thinks he can lead Nightfall to win every battle against the Brotherhood of Shadow, but he is in for a brutal shock when the Brotherhood summon demons to fight for them.

Chaos Lennox is the main character in A Chronicle of Chaos.

Characters from this army that you can expect to see in A Chronicle of Chaos include:

Chaos Lennox – Son of high-ranking commander Raven Lennox, and grandson of Callista Nienna, Chaos is well-bred and very skillful with a sword.

Dana Thialdor – Strong, confident and logical, Dana keeps Chaos grounded and she acts as his second in command.

Mercury and Syfer Lennox – Chaos’s twin brothers. They are like their brother-confrontational and disdainful of authority.

A Chronicle of Chaos is now available from Amazon!

6 responses to “The Light and Shadow Chronicles symbol no. 3 – Nightfall”