New dark fairy tale The Forest of Trees is released

Talented author Anita Kovacevic is featured on my blog today to showcase her new book, a dark fairy tale entitled The Forest of Trees

THE FOREST OF TREES BLURB:

When a family of four faces the brutal reality of their city life, they readily embrace a complete change. Emma and David Stone, with their kids Jeremy and Dot, move to a small town with their big hopes. However, small towns have their own secrets – from urban legends about The Forest of Trees to family skeletons in closets everyone knows about.

Gradually, Jeremy and Dot make some new and unusual friends, whereas Emma and David start working again, and things seem to be going for the better. But evil never rests. The Jacksons, a bigoted and brutal family of pig farmers, however scary, are not the only ones leaning towards malice. The more new friendships grow, the more villains will struggle to retain power. Will the arrival of the newcomers tip the scales in favour of the good or the evil? And how can The Forest of Trees play its part in the solution?

The life between the legendary Forest of Trees and the small town of Tillsworth is separated only by a road. All it takes to reconnect is to take that path. 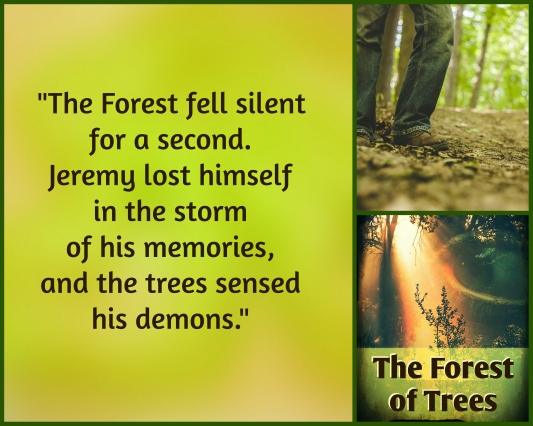 ‘This is not a fairy tale for children, but an adult examination of the way belief in oneself can change the course of lives. It is lovely, frightening, joyous, and painful. Anita Kovacevic can put another notch in her author’s belt with this brilliantly written book.’

By Elizabeth Newton, from Between the Beats (https://elizabethnnewton.com/2017/12/28/the-forest-of-trees-by-anita-kovacevic/)

‘Some of the parts were like the fairytale, happy and carefree, but other parts were nothing but the harsh reality.
The ability of the author to jump from one to another was so easy. I loved the beautiful description of the forest creatures, but I also loved the other side of the coin…’

From the author’s foreword:

Our lives always consist of beauty and ugliness, and if we are lucky, we get to keep the balance of the two. The good and the bad start from within us, and spread all around us. It is what weaves this world, and, I believe, all worlds everywhere and everywhen.

In a way, this story is also a horror fairytale, but it is not for children. You may feel like reading some parts to your children, but those were the parts told by my own inner child, the one who still hopes and believes in magic. The horror in the story has nothing magical about it – it brings out the harsh reality I hated to write, but had to write out of me.

To paraphrase the words of two fascinating authors, we must write even that which we don’t want to write, because it must be said (S. King). And it is up to us which side we choose – the good or the easy (J. K. Rowling).

For myself, I admit to having both sides, but I intend to always feed the good in me – always.

Jeremy felt as if a gigantic troll with spiky teeth and heavy hands was pounding with a rock hammer against the insides of Jeremy’s skull. The noise of his bloodstream, the rhythm of his rage, the tremor of his fear, all were so strong that not even the school bus, hitting every single bump on the road, could shake them off. It was like his heart had been mauled from his chest by a monster claw, as flashes of the ruined canvas blinded his eyes like electricity coming on and off. Unconscious of his own actions, he reached for his chest to check, but there was no blood gushing, although it felt hot and excruciating just the same.

He wasn’t wiping off any tears, for there were none to dry. He wished there had been. He wished he could still cry about it, the way he had with his dad that day in the bathroom, and wash away the feeling of shame, guilt, filth, ruin and fury. But his eyes were as dry as the desert sand, and he stared through the bus window, aimlessly observing the scenery without actually seeing anything. He was almost numb to the outside world and the people around him.

CHAPTER 12 – A CHANGE IN THE WEATHER

“I hope nobody is still out there,” Miss Pagiotti said.

The rain shower had turned into a thick curtain, masking most outer events. For a second, Miss Pagiotti thought she could see something or someone still there, so she grabbed Mr Jones by the wrist, and they both rose to their feet and walked even closer to the window.

They froze at the image they saw.

Angel’s family was walking outside in the rain, from the direction of a nearby supermarket to their lorry, parked further down the street. The group was led by the grandpa, his grey jacket drenched, steel-framed boots threading the puddles. His dark hat was tucked on his forehead, hiding his wrinkled face, as his eyes fixated on the lorry; the weather never swaying his stride, despite his limp. He walked as if the storm was merely an annoying fly to swat, and ignoring everybody behind him. Angel’s dad followed, copying his father, almost tripping as he forced his legs to adjust the pace and remain behind the pack leader. His yellow fisherman raincoat protected his body, but raindrops blinded him. His two teenage sons walked each on one side of their dad, trying not to stay behind. The two dark-haired adolescents were shaking from the cold, their hands in their jacket pockets, all wet through, skinny, grim and unhappy, faces freshly scarred from fighting or getting beaten. Angel dragged his baby brother behind the trio, annoyed at being left behind as the designated babysitter, his bald wet head glowing in the street light.

As the Jackson procession passed the restaurant, Ben’s dad opened the door ajar.

“Mind your own business, you blithering idiot. The Jacksons need no charity,” Old Jackson barked above the noise of the storm, not even looking at the man.

OTHER BOOKS BY ANITA KOVACEVIC:

Anita Kovacevic is multi-genre author of both children’s and adult fiction. Her belief in the power of storytelling has been strengthened through her years of teaching and teacher training.  Anita enjoys writing stories which come to her on her ‘dreamstep’, blending reality and magic, and has a quirky fondness for writing limerick stories. You can read her reviews, book news and author interviews on her WordPress blog Anita’s Haven. She lives with her husband and children in Croatia, where she graduated from university with a degree in English and Spanish Literature.